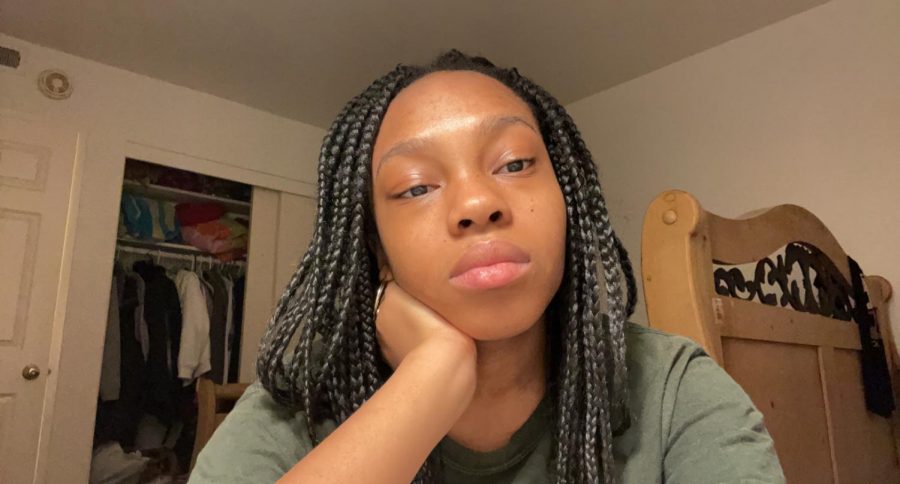 Chinonye Omeirondi is a Junior at Cypress High School who recently won a prestigious award  from the established YoungArts foundation. Her talent and spike in writing started in elementary  school when her father would take her and her siblings to the library to read books.  Chinonye stated, “I realized writing was cool and would write in notebooks with random stories. Writing became my thing afterwards.”  Although Chinonye loves creative writing, she admits that it isn’t a smooth process or journey.

She describes that the entire writing process itself is difficult and laborious.

”I think for me, finding which words to use to make it flow together especially when you want a certain theme or style is difficult. It takes time to find how you want to structure your sentences and what language you want to use.”

The process for YoungArts wasn’t any different, as she exerted her blood, sweat, and tears into her pieces. Chinonye had her mind set on applying for a while, but her direction slightly changed when Covid-19 struck. Since everything was online, she decided against writing one new piece for YoungArts, so she submitted two pieces from her 2020 summer writing class. Chinonye submitted her pieces for two categories, and won the 2021 Honorable Mention in creative nonfiction with her pieces titled, “Evolution of an Angry Black Girl,” inspired by how growing up as a Black girl impacted her childhood, and “Celebration of Life” which was written straight “off the dome” while she listened to her Nigerian music playlist. These prestigious awards furthered Chinonye’s love and ambition to continue writing.

She said, “I’m happy that through writing, I was able to gain some confidence. I just keep writing because it’s something I’m set on. I like how after you’re done writing, you can relax and read through it and it’s gratifying.”

Like many talented artists and students, Chinonye’s motivation to write comes from the pressure of deadlines, bursts of ideas, and because she doesn’t want to miss opportunities. She always wants to experiment with new ideas, alongside her love and passion.

She revealed that, “Writing is just really beautiful and a great way to express feelings and see the world. It grants you the freedom to create anything and as an author I really like being able to impact my audience through writing. When I write, I don’t write for anyone besides myself. I don’t write for validation because it would feel as if I’m being unfaithful to myself if I’m writing to cater to someone else’s interests. I want whoever that’s reading it to enjoy it.”

Chinonye also expressed that her topics are often about societal hardships and inequality that disproportionately impact many.

“I want to send a message of perseverance because my writing isn’t positive and rather a lot about hardships. Things aren’t easy and I still want the audience to know that life will not be a bed of roses. Seeing the recent events we don’t have a choice but to keep going through hardships and continue.”

Writing to her isn’t just about English essays and grandiose vocabulary.

Chinonye stated, “Writing in and of itself is a letter and the greatest tools of freedom we have in the world. It’s only through writing where we achieve and preserve the greatest moments in history. Letters from Birmingham from MLK, thrive off of writing. Religion is based on scripture, writing as a whole is much more intricate and beautiful than just English teachers’ assignments. It’s power.”

Alongside her many achievements and accomplishments, Chinonye revealed that her writing journey is also filled with regrets that she wishes to erase from her memory.

“I wrote a really long story for an English project, but being extra, I wanted it to become a real book. My parents shared it with relatives, who then shared it with everyone else, and soon people paid money for it. The writing is bad, and whenever someone brings it up, I just erased it from my memory and try to forget.”

She wishes she could tell her younger self to not rush into everything. Rather than focusing on being the best and trying to become number one, she wishes that she took more time to learn and hone her craft before attempting big projects.  Despite her little bumps in the writing road, Chinonye looks forward to more projects and has bigger goals. She submitted a few pieces to scholastic writing awards and won a Gold key in science fiction/fantasy and a Silver key in creative nonfiction. She also wishes to get more publication in other magazines and wants to become a finalist in YoungArts. Chinonye also plans on applying to the Adroit Summer Mentorship program to gain more experience and connect with more writers.  She is currently working on her own literary magazine called the Afro Literary Magazine, which recently closed submissions for their upcoming issue that has the theme of “pain” and is sending out the last of feedback and figuring out the layout. She wants it to be digital and print and expressed that submissions were filled with amazing poetry, prose, and artwork.

Chinonye also expressed as a closing message that she often downplayed her love of writing out of fear and judgement. But now, writing gave her confidence that she wishes to share.

“Don’t be afraid of what you like or what you do. At the end of the day it’s your life and legacy.”

Cypress High School is truly fortunate to have such a talented writer and can expect amazing things from her in the future.