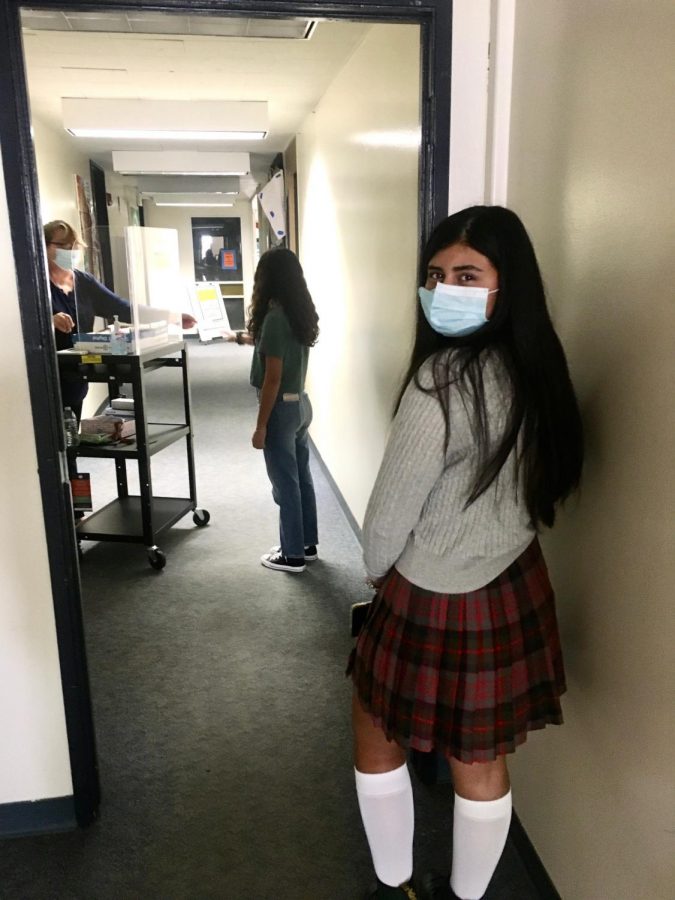 Students had to wait indoors for school pictures due to poor air quality. photo by Ms. Takacs

On October 26, 2020, near Santiago Canyon and Silverado Canyon roads, a fire rose through the hill area around 6:45 a.m. Santa Ana winds infuriated the fire pushing 80 mph. Reported by La Times, at approximately 10:30 a.m., the fire had burned 2,000 acres worth of hills. Approximately 60,000 residents of Irvine were issued an order to evacuate the area as soon as possible.
The sky, a gloomy yellow, was filled with ash while the wind was spreading it throughout Orange County. At 4:30 p.m. on October 26, the fire raged through 7,200 acres with 0% of the fire contained. According to NBC Los Angeles, the Orange County Fire Authority reported that over 500 firefighters were battling the fire. Unfortunately, two firefighters were taken to the hospital to be treated for their 2nd degree and 3rd degree burns.
As reported by the LA Times, UC Irvine announced at 11 a.m. that nonessential staff should head home, but did not evacuate their 7,000 students who were on campus.
At around 8:00 a.m., BBC News updated their readers on Tuesday, October 27, 2020. Now there are 90,000 people in Orange County that are needed to evacuate and almost 15,000 acres burned, only 5% of the fire is contained.

Underclassmen at Cypress High are taking pictures this week on campus. Dr. Hodgson, the principal, said, “depending on the air quality readings from the AQMD, we may need to have students wait in line inside for pictures. We have a plan to do so if necessary. Students will wait in the hallways of the 300 building before taking their picture in the media center.”
Mr. Quiron, the band teacher at Cypress High, says,” students (referring to band and pageantry) do need to complete and record activities that may necessitate that they exert themselves outdoors; in the current conditions they are encouraged to stay inside and follow health and safety guidelines regarding the air quality. The physical activities will resume when the air quality returns to healthy levels.”
Updated emails were sent to Cypress students about cancelling athletic camps and Lunch services, except two locations, due to the pollution in the air.
It is important to always have an evacuation plan that is useful in such situations. Necessities should be stored for when needed to leave at unexpected times.