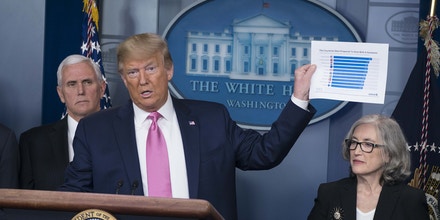 Donald Trump’s presidency and leadership have been heavily debated across the country, which still suffers from the “Great Divide”–the social, political, and demographic rift that exists between Americans in today’s day and age. Still, the president has made certain comments that were considered uniformly dangerous, regardless of what political party, social ideology, or moral virtues one supports.

The definition of truth and transparency has been stretched during Trump’s administration, but the pandemic only further illuminated the lies and conspiracy that has cluttered these last four years. When the virus first formally reached the attention of American citizens, around late January and early February, Trump assured the press that the virus would die down “when we get into April, in the warmer weather—that has a very negative effect on that, and that type of a virus.” (https://www.theatlantic.com/politics/archive/2020/08/trumps-lies-about-coronavirus/608647/)

In truth, seasonality had no effect on this virus. While this might seem like a minor, glancing comment, coming from the Potus, this weakens the trust we can place in the White House as a reliable source of information. Trump repeated reassured the public that the Virus would disappear, “It’s going to disappear. One day it’s like a miracle—it will disappear.” This dangerously underestimates the fatality of this virus. Additionally, Trump repeatedly stated that the number of Coronavirus cases was steadily decreasing, and that, “Coronavirus numbers are looking MUCH better, going down almost everywhere.” This was a false statement, in simple words. At the time, the number of cases was increasing and/or staying constant. One could say that these were the consoling words of a president that wished to not worry his people and instead wanted to provide and hope and stability. However, it is not the duty of the president to safeguard the false hopes of the people; it is to protect the lives of the citizens.

“99% of COVID-19 cases are totally harmless.” (https://www.theatlantic.com/politics/archive/2020/08/trumps-lies-about-coronavirus/608647/) This was another injurious claim made by our current president on July 4, 2020. According to the World Health Organization, roughly 15% of COVID cases are harmful, and five percent can be fatal. Trump’s remark caters to that illusion of safety and security in a way that is harmful to the country. The president must urge his citizens to hope for the best but prepare for the worst. His statement not only brushes aside a serious topic, it extraordinarily undermines the lethality of this virus. “He believes that 99% of cases are harmless? Let’s infect him with COVID and see what happens,” Karissa Lee, a senior, jokes.

Trump proudly acknowledged the nine million jobs given to the unemployed population across America and claimed it was “a record in the history of our country.” It is true that from May to July, 9 million jobs were gained. But it is also true that 20 million jobs were lost from early February to April when the pandemic first impactfully hit the U.S. (https://www.theatlantic.com/politics/archive/2020/08/trumps-lies-about-coronavirus/608647/)

The Coronavirus presents a situation of fear and alarm for people across the country, and across the world. At this time, we need leaders who are strong enough to confront the American people about the dangers of this pandemic, rather than hide behind a false sense of security. We as a nation need to be strong and vigilant during these difficult times. Even if we have a president that makes dishonest statements and does questionable things, we still owe it to our country and ourselves to remain safe and quarantined.