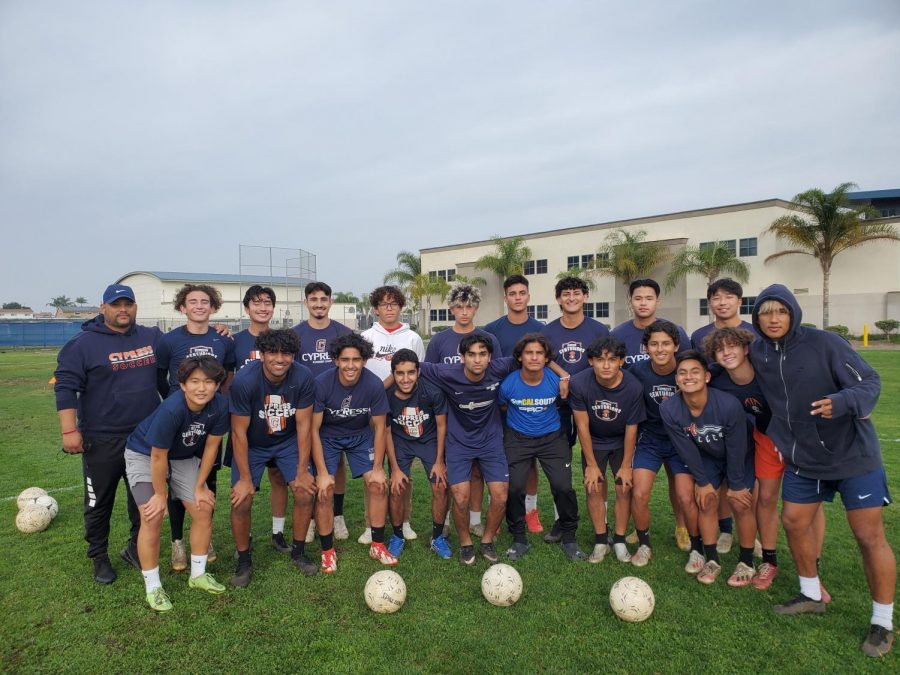 Cypress Boys Soccer practices hard as a team to prepare for a victorious season!

Cypress High School’s Varsity Boys Soccer team is slowly kicking off the season with warm-ups and practices after school. After an entire year of quarantine and online school, the team is itching to get back on the field and compete!

Coach Mora has high expectations and hopes for this season.

“I have high expectations every year. But this year, we have a good number of scholar athletes, so I think this season will be pretty good. Covid drastically impacted the team since athletes weren’t as motivated nor were they exercising on the day to day, so they lacked condition and ability to move in the field,” he stated.

This year, star players include Senior Rafay Shafique, Senior Brandon Ramos, Senior Darwin Guzman, and Senior Cole Kim. The coach noted that they had drastically improved from last year regarding maturity and IQ sense on the field.

Captains Shafique and Ramos also had high expectations for the season.

“I want to have fun for my last year. I’ve been playing all three years so I want to have a good bond with the team. This year, I want us to be more locked in. We were off focus due to Covid, but this season we have more motivation and time to focus on school,” stated Shafique.

“I want us to make CIF. Last year we didn’t make it so I want us to have a future this year,” said Ramos.

While the captains had strong hopes for the future, the rest of the team also felt the same. Seasoned varsity member Darwin Guzman stated that, “the best part of playing soccer at Cypress is the brotherhood and how everyone’s connected. It’s more than friends and teammates. We’re family.”

The brotherhood and bond the team had is definitely shown on the field with the recent games. More importantly, they always work together to maximize team play and always win or lose as a team.

“Work hard because your spot isn’t always secure but enjoy your time here,” he stated.

Sophomore Freddy Mora stated, “It’s very fun being in varsity especially as one of the only two sophomores. It’s interesting because there’s a lot of players to look up to and I can learn from their mistakes. I want to definitely become top 11 and become the strongest and fastest now that I’m in varsity.”

Roberts, a junior, also told the Centurion Spotlight, “Varsity is a great experience and I love playing soccer with my best friends. I want to just keep the tempo up and motivate the team.”

As a last word of advice, Coach Mora advises the team to “not forget class, because school is always first. No school means no opportunity to play so work and play like it’s the last game.”